Gold-leaf comes in various different thicknesses, qualities and colors. Despite all our efforts to make sure that the thickness of the gold-leaf is as even as possible, we can only give an estimate of its thickness, especially since it tends to be a little thinner towards the center of the leaf. The estimated figure is around 1/7000 of a millimeter, or approximately 0.1 µ. This is why it often makes more sense to consider its weight per 1000 leaves, rather than its thickness when purchasing gold-leaf. The thinnest leaves weigh around 12g per 1000, while the heaviest weigh around 50g per 1000 different types of gold-leaf weigh between 16g and 18g/1000. As gold powder and gold flakes are made from gold leaf, their thickness is comparable.

When it comes to color, the progress from one shade to another is gradual, but there are a few rough figures one can go by to get an idea. Starting from a warm yellow in its pure form, gold becomes a bright yellow when combined with quantities of silver between 5 and 30 percent. Between 30 and 50 percent silver content, it takes on a pale greenish yellow hue and starting 50 percent it becomes white. When pure gold is mixed with copper, starting at 5 percent, it becomes reddish and takes on a copper shade starting at 30 percent copper content. As little as 5 percent of palladium gives gold a cold yellow shade. It has often been assumed that gold was initially mixed with other metals for economic reasons, but the truth is that their main purpose is to improve the physical properties of the material during the beating of the leaves. As even the smallest amounts tend to alter the color of gold, we as manufacturers have developed our own standard nuances. 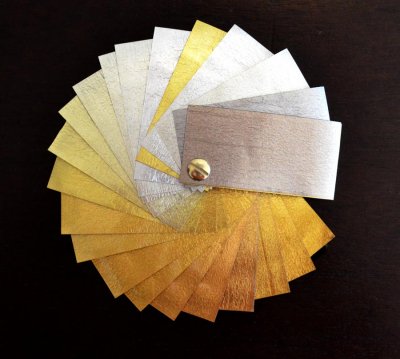 There are several types of metal leaf that imitate these colors. Beaten silver and beaten copper, which are much thicker than gold-leaf are available. There are also other types of imitation leaf made from metals such as aluminum, which can be used to good visual effect. Lastly, there are types of beaten-metal that are pre-oxydized in different patterns and colors.

Gold- and metal-leaf come either in loose form, i.e. placed between the pages of a booklet, or in transfer form, where it is pressed onto the leaves which it sticks to. This has an impact on the application technique.